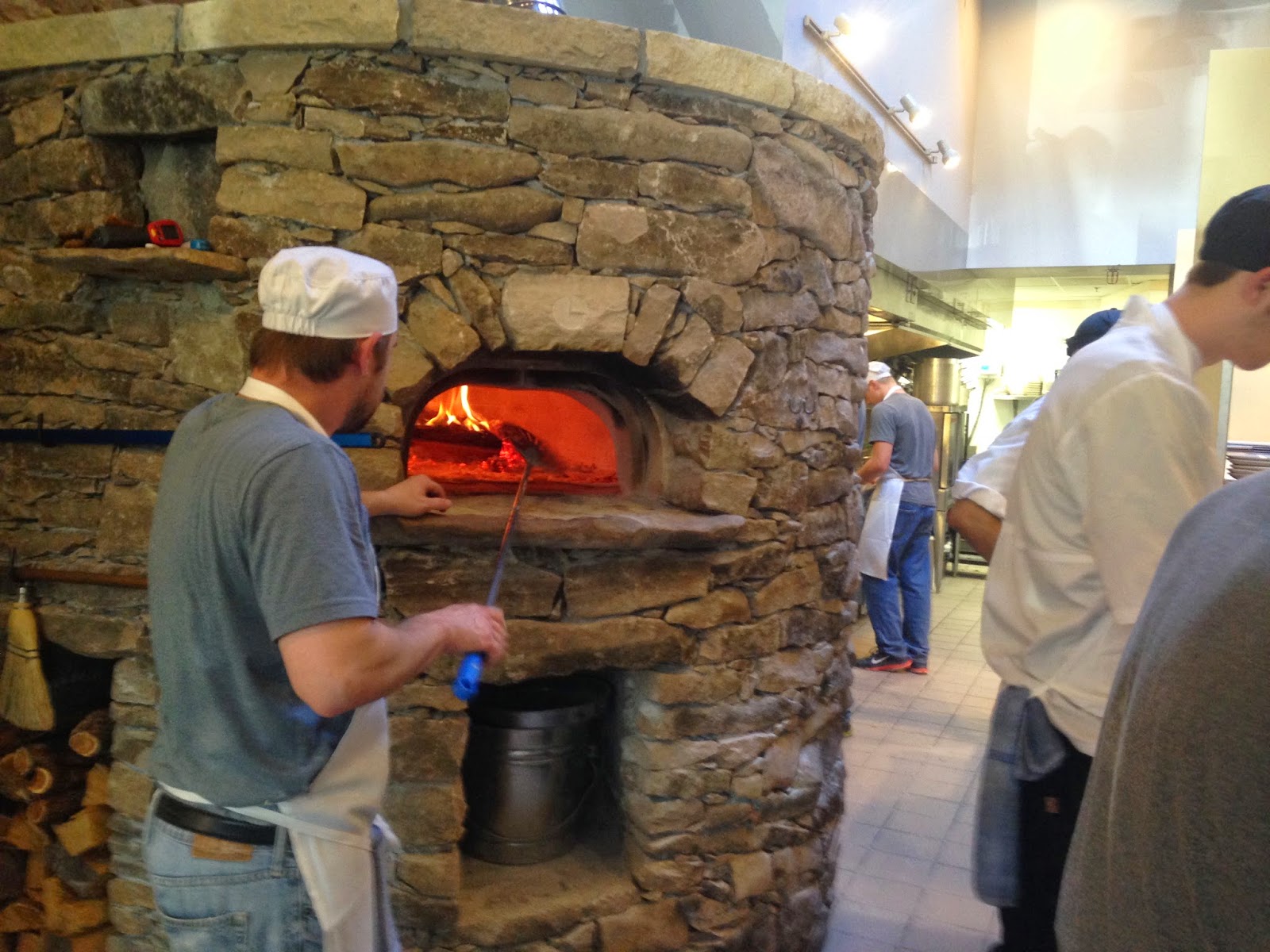 Having lived in Napoli (Naples, Italy), being married to an Italian, not the "American" variety, and descended from Italian immigrants, I appreciate a well made wood oven Neapolitan (Napolitana) pizza. Many have tried to duplicate pizze Napolitane, but few have succeeded and I said to myself "speriamo" ("let's hope so") as I entered Limestone for the first time.

I tell you up front that I am comparing, somewhat unfairly, Limestone to the pizzerias of Napoli because they claim to offer Neopolitan pizza, so I may seem harsh. However, my comments are meant to be constructive, offering Charlie (the very friendly owner who happened to be making pizzas next to me while we chatted about Italy) the opportunity to enhance his restaurant as they grow and flourish.


I had heard rave reviews from fellow Yelp Elite Scott T and others during their short time in existence, so I had to give Limestone a go. The name gives zero indication of the cuisine and I would never have known that this was a pizza place had my friend Scott not told me about it. Busy for a Thursday night, as a single I was able to be seated right away at the bar where I could watch the pizzas being made and placed in the ornate wood-fired oven. 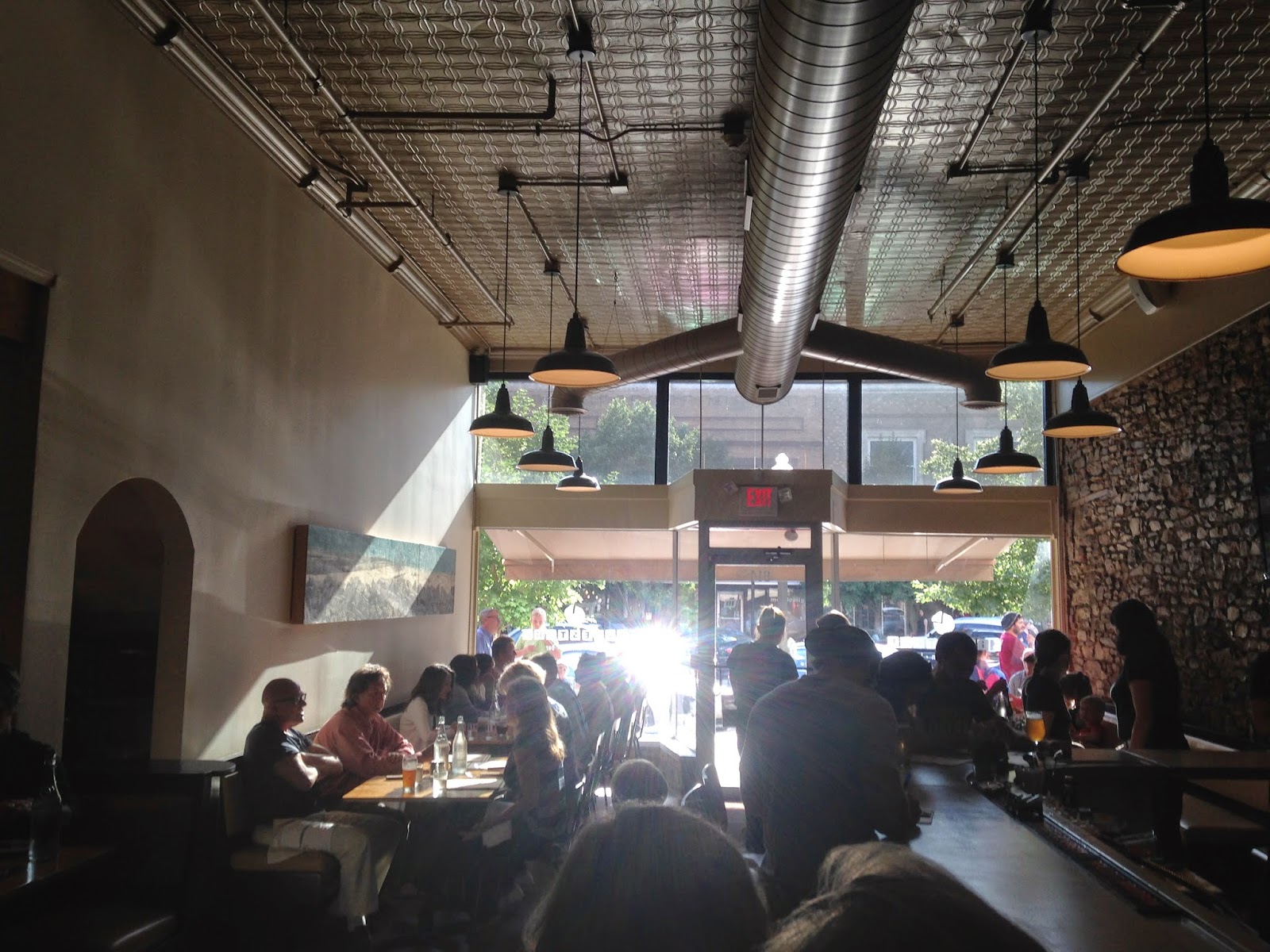 The space is modern, not my favorite as you probably know by now, with an abundance of stone, wood, glass, and steel, and bright, almost too bright for my sensitive eyes. The center attraction is the large stone-encased wood pizza oven blazing away while pizzas are being hand tossed and decorated for a quick dip inside. The staff all seemed sincerely friendly and helpful, although the tattoo clad bartender had a bit of an attitude, but not so much that it was off-putting, and service was fast and efficient.


Offering an "arancini" ("little oranges") appetizer ("bites") special for just $2, the two Neopolitan style deep fried saffron infused rice balls complete with fresh mozzarella inside sat atop a small plate of tomato sauce. Aranicni di riso are a pizzeria antipasto staple in Naples along with crocchette di patate (potato croquettes) and other deep fried delights and the only way to start a night in a traditional pizzeria. Limestone's arancini were very well done, crunchy outside and moist inside, perfectly seasoned with saffron and other seasonings and a small ball of fresh mozzarella inside. I asked Charlie if they made their own mozzarella and much to my surprise he said "yes, about 600 pounds of curd per week". 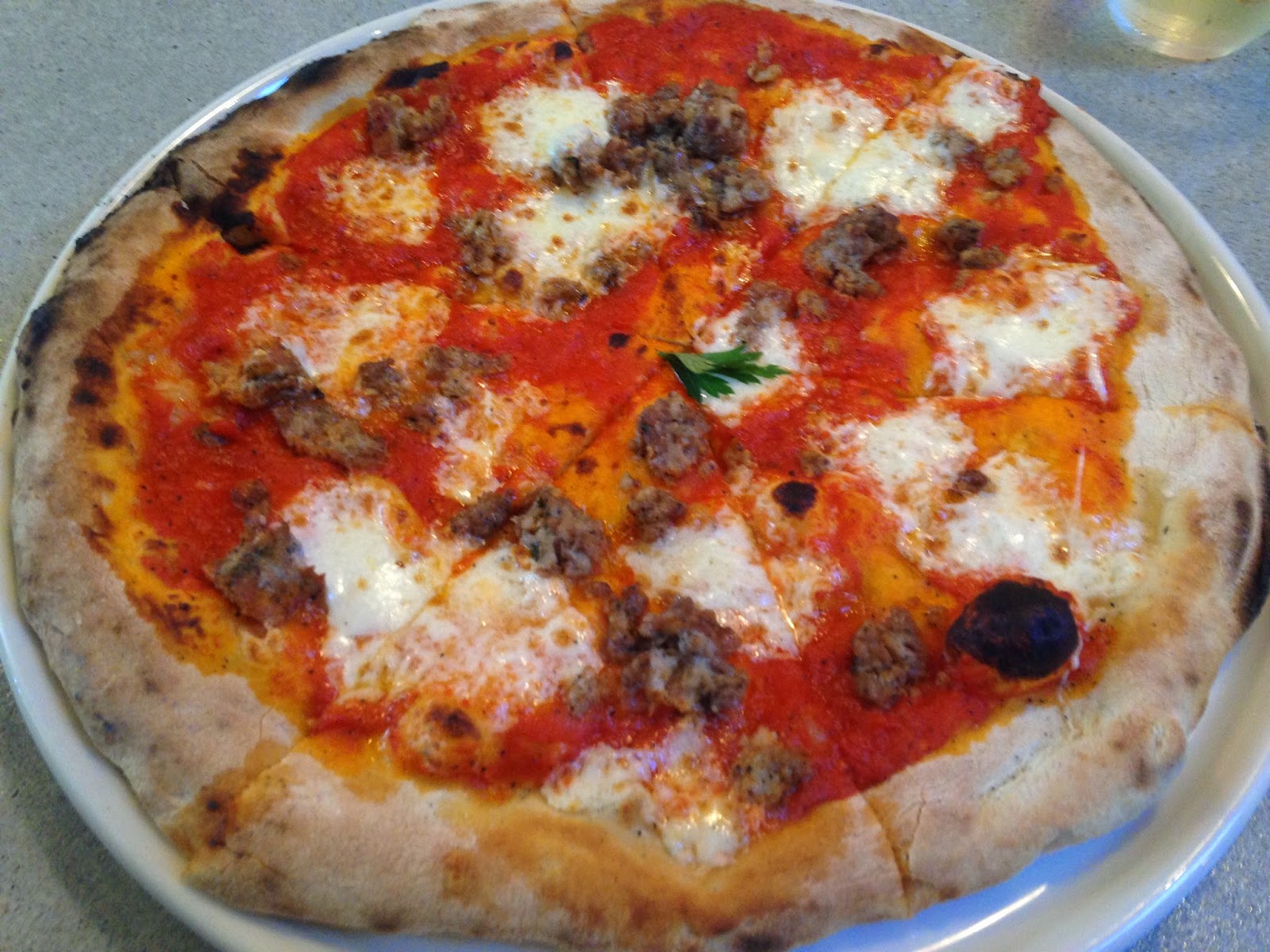 Now for the pizza ... dun-dun-dun. With only six offerings (seven if you include the special), there is not nearly the variety one would find in a pizzeria Napolitana. I ordered the sausage pizza, a simple and traditional choice and normally not something I would choose, only because it and the Margherita (fresh tomato and mozzarella with fresh basil leaves on top - named after Queen Margherita's favorite pizza), were the only two traditional Neopolitan pizza options available. I normally order pizza capricciosa (fresh tomatoes, ham, mushrooms, artichoke, fresh mozzarella cheese - fior di latte - and basil) or my all-time favorite, the friarielli e salsiccia (broccoli rabe and sausage), so I was a bit bummed that there was so little variety. Bacon and eggs on pizza? ... bacon and potatoes? ... Hollandaise sauce? ... Gruyere cheese ... NEVER IN NAPLES! 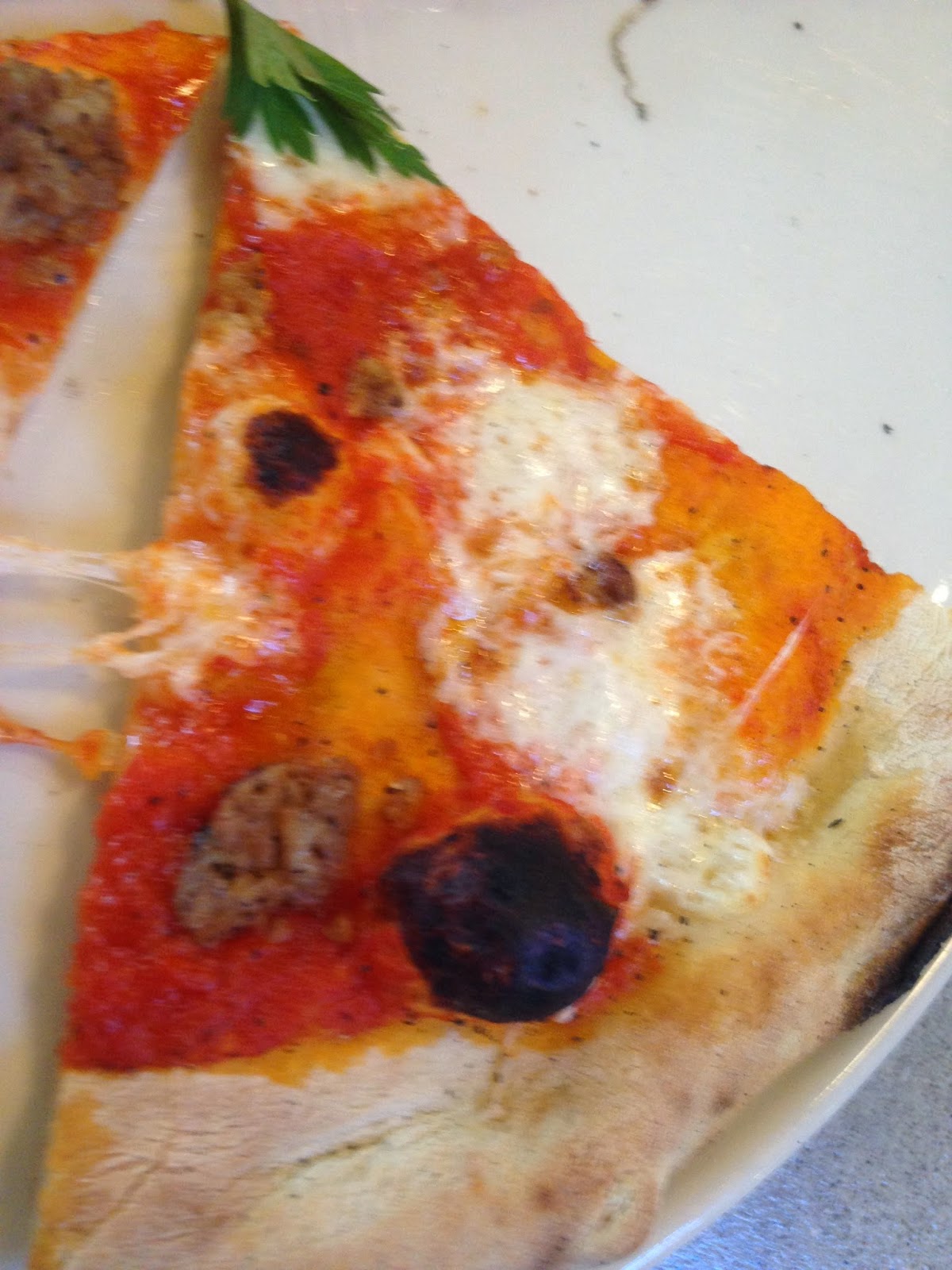 The pizza was a bit small ($10 for a 12 incher), one to two inches in diameter less than pizza Napolitana (for comparison, a sausage pizza in Naples would cost around 6 Euros, a little over $8). The consistency of the dough was close, but it was a little thicker than the original, particularly around the edges. Neopolitan pizza is soft on top, a little crisp on the bottom, with a couple burnt spots and thin enough as to not overwhelm the semi-abundant toppings. The tomato sauce was a tad too spicy and excessively visible due to the lack of mozzarella and sausage atop my pizza. Italians do not overload a pizza with toppings as is customary here in the US, but there is normally enough fresh mozzarella cheese to nearly cover the baked pastry completely after it has melted. That was not the case here and twice as much cheese (and sausage) still would not have sufficed. Although not nearly as good as the worst pizza I have eaten in Naples, it was good and surely better than anything I have eaten in Lawrence thus far. If compared to an $8 Neopolitan pizza, my pizza (based on size and abundance of toppings) should have probably been priced at $6 max, so it was not a great value. 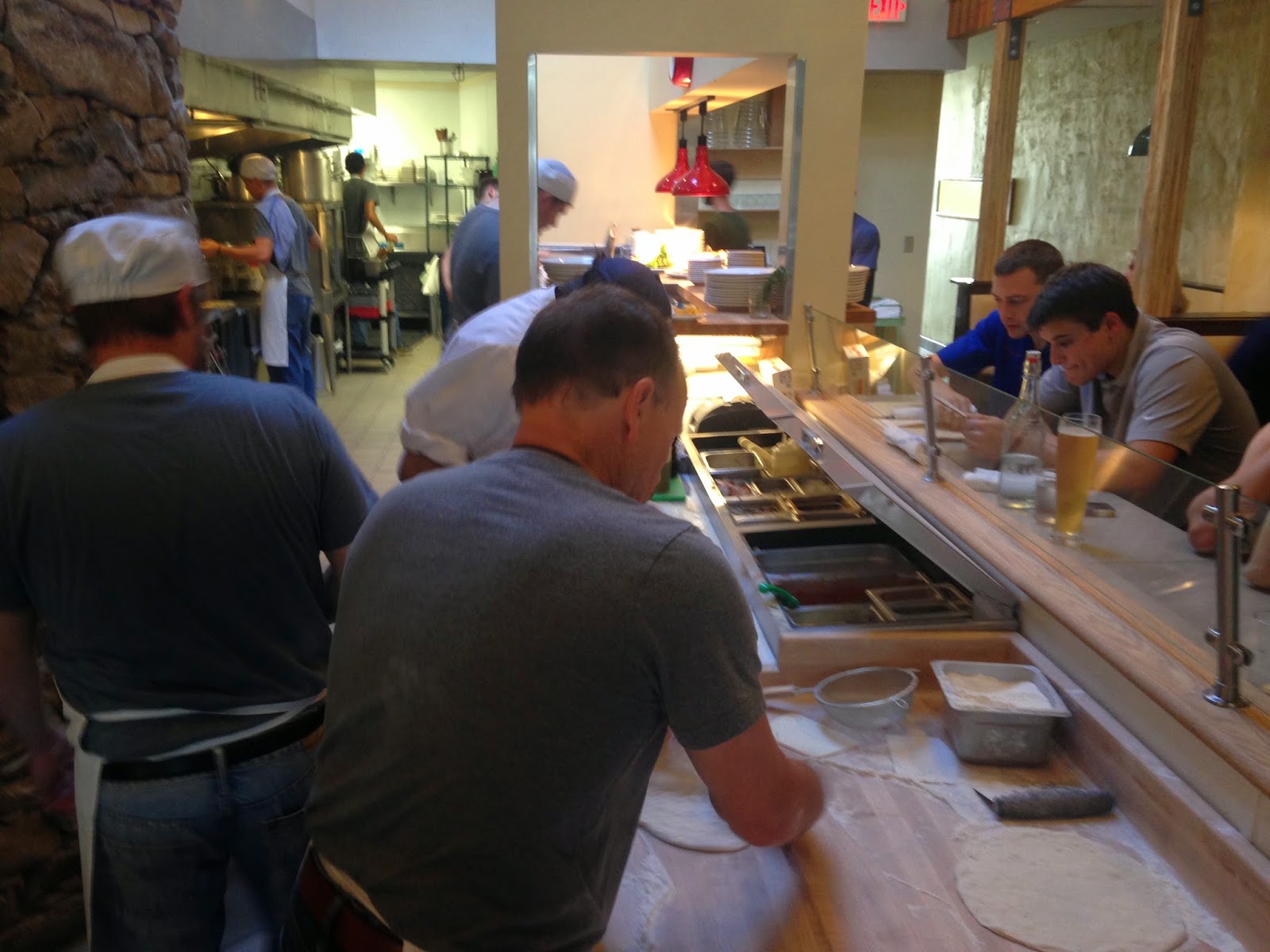 But what do I know? Limestone has quickly become a popular spot on Mass Street and from the looks of it, doing extremely well ... BRAVO! In a town void of a decent Italian restaurant, - people voted 715 "BEST FINE DINING IN LAWRENCE" in this year's Best of Lawrence competition - Limestone is a welcome addition. I will return to see if they improve and to try other dishes (including hamburgers and pastrami sandwiches for some odd reason). Charlie seems like a nice guy and I wish him well ... good luck Limestone!

Read This Review And More on Yelp