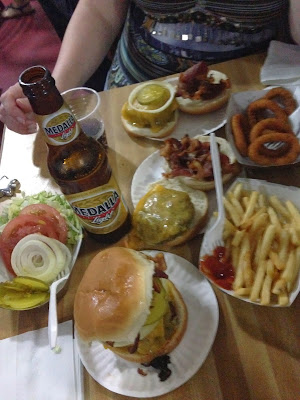 
Feeling burger deprived all day after our horrible experience at El Patio de Sam last night, we walked 2 km (uphill in the snow … both ways!) for a real burger at El Hamburger!

My wife says she saw Anthony Bordain … “I eat, I travel, I drink too much” … eating there on one of his episodes in Puerto Rico and Yelp reviews were mostly 5 stars, so we had to try it. We almost literally ran into the place on Christmas day coming home from El Escambrón beach, so I knew where it was.

The place looks like it’s on fire with smoke billowing out the top and across the busy street from the dozens of small, very thick burgers being prepared for inhalation by their many ravenous patrons. It is rather small with one dining area seating about 40, a small counter, and another small room that we did not see well because of the crowd around the front door. The place was packed!

They had two servers, as far as we could tell, doing a remarkably fine job considering the number of people crammed inside. We ordered the bacon cheddar burgers ($3.60 each), a side of French fries, onion rings, a root beer, and a Medalla beer.

The burger patty, like El Patio de Sam, were smallish but thick, probably 5 ounces or so (but also $7 less than Sam) and smothered with cheddar cheese. There were several pieces of bacon wrapped in a heap on one bun and our server brought a container with plenty of lettuce, tomato, onion and pickle. By the time I built my burger, it looked like the Leaning Tower of Pisa.

The onion rings were good and plentiful for $1.90, but a little too well done for my taste. The fries were abundant for the $1.90 price, the shoestring variety, hot and crispy just the way I like them. Root beer is root beer ($1.49) and the local Medalla Light thirst quenchingly cold and at $3.60 a reasonable price.

The servers are nice and the crowd mostly couples and families, so the noise level is moderate. They only take cash, so bring enough with or use the convenient ATM they parked right outside the door and you must pay the quiet, burly man behind the cash register before you leave.

El Hamburger serves a great, reasonably priced burger and all of the usual accompaniments, so if you are hungry for the all American meal, by all means … give them a try!

CombatCritic Gives El Hamburger 8 Bombs Out of 10 … BOMBS ARE GOOD!